“Blessed are those who are persecuted for righteousness’ sake, for theirs is the kingdom of heaven” 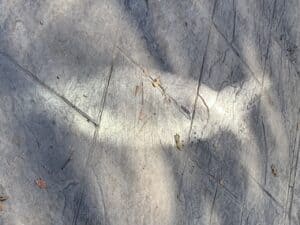 On a recent walk in our neighborhood, I observed the image shown here created by the rays of the sun on a driveway. It was so intriguing that I had to take a couple of photos. My mind immediately reflected on the Ichthys symbol. It is a symbol for fish as Jesus said he would make the disciples to become fishers of men. On two recorded occasions, he took a few fish and loaves and fed thousands of followers. Jonah in the belly of a fish and more. It has been one of the images that has endured over time in Christianity. We see it today on cars and other objects.

But, most importantly, it was used between believers. During the Roman persecution era, it was used to identify friend or foe. When you encountered someone, one person would draw an arc on the dirt. If the other one completed the symbol, then they knew they were safe. Why do I bring this up today? Simply because I see a level of persecution in our nation for simply being a Christian. It has been growing and accelerating over the past few decades. We see it on so many fronts.

But be encouraged; Jesus said that we would be blessed as his true followers when we are persecuted. The persecution may be brought or allowed by God. The early church grew from Jerusalem to all over the known world because of the Roman and Jewish persecution. Ours is the kingdom of heaven and nothing, no one, no persecution, can separate us or take that away from us. That is the confidence we have in Christ. While we might have to start drawing arcs in the dirt again, be bold in living out your faith!