He majors in miracles!

He majors in miracles!

Is that really what I saw? 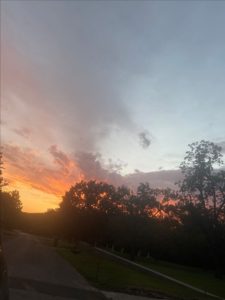 So many times we see things others don’t or vice versa. Some may look at the same object or scene and see entirely different images or circumstances. Art, especially abstract, can create all forms of visual thoughts to many different observers. What I see may make no sense to you.

Take for instance this photo our granddaughter Sarah captured recently at sunset. She shared it with us and now I’m sharing with you. What is the very first image or thought you had? Mine was—a Halloween jack-o-lantern. What, you don’t see that? Come on! Well, I instantly had two additional image thoughts.

The scene is so incredibly beautiful, it could have only been from the Lord. No human could create or paint it to match its majestic brilliance. But specifically, I saw two other things other than a carved pumpkin. Here goes. The Shekinah Glory. *It is a visible manifestation of God on earth, whose presence is portrayed through a natural occurrence. The word Shekinah is a Hebrew name meaning “dwelling” or “one who dwells”. Shekinah Glory means “He caused to dwell”, referring to the divine presence of God. The word Shekinah is not in the Bible, but the description is. The presence of God or the glory of the Lord is outlined in Exodus, II Chronicles, Psalms, and elsewhere.

The last image I saw was a manifestation of possibly along the same order of what Moses saw on Mount Sinai with the burning bush. God, in all his glory, was present in the bush in fire and the bush wasn’t burning. Sarah’s photo captured that so well. I am certain that Moses was saying; “I can’t believe my eyes, is that really what I am seeing?” He was so intrigued he had to turn and examine. I sense that was one of the moments when Moses realized just who the God of Israel really was. The rest is history.

What about you? Seen any burning bushes in your life, ones that appeared to be on fire but weren’t actually burning? Please tell us if you have. I haven’t. But God shows up in mysterious ways, even today. He majors in miracles. Our salvation is one, just to start. Just as we are amazed at scenes like this, the people who saw Jesus performing miracle after miracle were ‘amazed’. But we see at the very end of John, the vastness of the Lord’s works, all miracles to us.

“Now there were also many other things that Jesus did. Were every one of them to be written, I suppose that the world itself could not contain the books that would be written” (Jn. 21.25 ESV). Miracles are, to me, things that are done by God that cannot be done by man, and most cannot even be explained by man, even scientists. From the beginning of creation until now, every breath of life is miraculous. We should worship God with powerful prayers of all kinds, believing He hears and can act, miraculously.

I’ll close with the most recent miracle in my and many other lives. This good news just came from Reed, the son of Jim Williams, Jr. Jim has spent 8 weeks on a ventilator and 13 ½ weeks in the hospital with multiple complications from COVID-19. Physicians say that 1 in 100, maybe 1000, possibly survive. Add to this, he had severe pre-existing pulmonary issues. Today, Jim is being released from the hospital to begin inpatient rehab. Reed’s last words today were; “May the very best chapter of his story be the one that has yet to be written.” Amen! So many people have been praying for Jim and his family during this long journey, and will continue.

Do you believe in miracles? Just open your eyes of faith!